Having recently worked on a project called   ‘Haven ~ The Refineries’,   when the ESPY Urban & Rural competition was advertised, I decided to consider the impact of the refineries on the Urban environment; this was as a comparison to my work on ‘Haven’ work which had concentrated on the rural impact, the effect of man & the elements on the landscape with regard to the building of the refineries on the boundaries of a National Park.  ‘My Pad’ considers the impact of the refinery from an urban viewpoint. It was taken from the East, from within Milford Haven and is grey and dismal. The second image was taken from the West, from within Pembrokeshire Coast National Park and depicts the ethereal nature of the refineries at dawn, as seen from the West.

In ‘My Pad’, the impact of the refinery was not only visual; there was also an impact on the individual. The Pony had probably lost his paddock, and now lives in a small ‘pad’ in town.” ‘My Pad’ was on exhibition as a part of the Elysium Gallery, Swansea’s Finalists Exhibition for the ESPY Awards, 2014 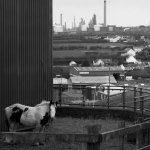 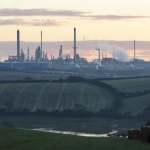